and Finally - the Galley build begins

After a long winter of mucking about in the workshop and occasionally managing to get a coat of paint on the galley panelling, the worktop finally got installed a week or so back - bedded down on white sealant to slow down the moisture ingress.

The next job was to fit the fridge compressor unit. This was carefully located on the support panel mounted on the engine stringer.

The cold plate was then fitted for the final time into the cool-box and the big hole sealed with two-part polyurethane foam; which amazingly was still active after many years in the shed.

The cooler pipework was then clipped to plywood blocked embedded in the insulating foam. the control box was similarly mounted.

The cool box was then installed after removing the compressor - its a bit of a fiddle to fit- and sealed with white sealant. The compressor was then refitted and then removed again and moved towards the main bulkhead to allow for a fair run of the cooling pipes. (There's just room for a ratchet screwdriver under the cool box.)

The coolant pipes were then connected (there's a one-shot fitting for these as the system is pre-gassed. Fingers crossed and some Fairey liquid applied to the joints to test for leaks and all appeared well.

In the photo you can see the second hand Huntress battery connected to the compressor ECU. The Multi-meter showing that the battery is on charge (it as also found in the shed) from the trusty CTEK7000 charger. Unfortunately there was no activity from the ECU or compressor.

It transpired that there was a wire missing from the Fridge kit (not sure where it went). A quick squiz at the manual (last resort), and the extra connection was made between the control box and ECU and lo-and-behold, the compressor sprang into life.

The next job is to fiddle the cooker box into position and thread it round its pre-fitted gas pipe. But there's some more painting to do before that.

Posted by Baltimore Bill at 16:09 No comments: Links to this post 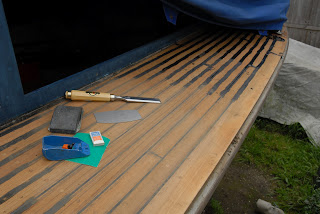 The New Years resolution for this year was to finish the deck. The weather has contrived to ensure that it is still not finished. but progress is being made.

Here's the Starboard side deck; plugged; rough sanded; caulked and in the process of trimming.

At least it sort of looks like a teak deck now, and it pretty much weather-proof (in parts.)

Trimming the SABAcaulk a week after laying is hard work. It said on the blurb that it could be trimmed and sanded two days after glopping into the seams. But I feel it needs longer.

So: trimming is a slow but sure job.

The seams are cleaned out; primed; breaker tape applied in the bottom and then caulk is squidged in with the sausage gun by hand. I had thought of an air squidger, but by the time the compressor has been brought out and wired up - it will have started raining again - so by-hand it is.

The tools in the shot are:-


I promise the next and last shot of the deck will be it finished. I just hope that it is this year.

Posted by Baltimore Bill at 18:08 No comments: 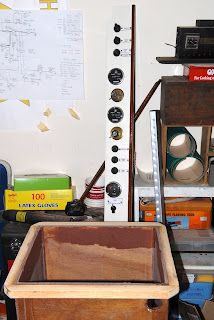 So, forget all this modern rubbish: Father Christmas in red (Coca-Cola invented that in the 30's); Christingle (goodness knows where that one came from); indoor greenery; cards; gluttony...

Going back to basics - today is the Winter Solstice, the shortest day - the real reason Stonehenge was built. The Sun returns tomorrow - no not the newspaper - that bright shiny thing we don't see too much of in this country. The nights start to draw out again, and summer is on its way.

Of course its perishing cold outside, and damp, so Huntsman 31 rebuilding occurs in the workshop - some of which is shown in the photograph. I calculate about 1% of the detritus in the workshop is in shot.

Most importantly; the fridge box (partially completed) at the bottom, awaiting yet more sanding and resin coating. Top centre is the rebuilt (to modern requirements) secondary electrical panel which will sit in the companionway within reach of the helmsman and provides the main electrical controls for the engine and ancillary equipment like navigation lights; screen wipers etc.

The wiring diagram on the wall is for the aluminium runabout - and copied from an MG-B Haynes manual - don't ask - and nothing to do with the Huntsman, its just that the blue-tack holding it to the wall will probably bring the plaster off if I try to remove the diagram.

So - whether you worship the Sun; Capitalism or other Deity, have a great time. See you in the New Year.

Posted by Baltimore Bill at 16:36 No comments: Links to this post